The National Federation of State High School Associations annually inducts stand-out coaches, officials and athletes who've made a mark in high school arenas into its Hall of Fame. It's the highest honor the NFHS has to offer, with the Illinois High School Association, a member of the Federation, terming it the "highest achievable accolade in high school sports and activities." 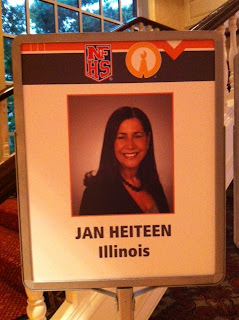 This year, along with basketball stars Kevin Johnson from California and Fred Hoiberg from Iowa, Heisman Trophy winner Pat Sullivan of Alabama, and swimming coach Rod Harman of Oregon, who just completed his 54th year as a coach, the National Federation honored Illinois's own Jan Heiteen, the astonishingly successful speech and theater coach from Downers Grove South High School. Above you'll see Jan's official poster from the NFHS summer meeting in Nashville, Tennessee, where she was part of the big, splashy awards ceremony with production values to rival one of her own shows. For once, instead of her students, it was Jan in the spotlight!

Heiteen has been a phenom in high school coaching since 1975, while still a student herself at the University of Illinois. As a college sophomore, Jan began as an assistant coach on the Champaign Central High School speech team, moving to positions at Waukegan and Maine East after graduation. She started at Downers South in 1978, and by 82, had helped her team make it to a 3rd place finish in state competition. With legendary coach John Hires, Heiteen and Downers Grove South took home seven state championships (plus five more 2nd place trophies and two 3rds) in the next 19 years. After Hires's untimely passing, Heiteen took over the reins all by herself, adding another nine state championships with her Individual Events teams, including back-to-back 1st place finishes in 2011 and 2012 and state championships eight out of the last nine years. Her teams have included (by my count) 56 individual state champions, with five champions this year alone.

After the 2012 IHSA championship, Heiteen took her kids to the National Forensics League National Tournament in June, where they earned a prestigious "School of Excellence Award." That's Heiteen below with students Billy Chengary and Michelle McCarthy, 4th place finishers in the Duet Interpretation event at the National Forensic League competition in Indianapolis. Chengary was one of Heiteen's 2012 IHSA champions, as well, taking the title in Dramatic Duet Acting with partner Erin Walsh. 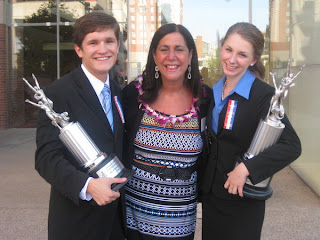 IHSA Executive Director Marty Hickman said, "This is an incredible honor for an incredibly deserving individual. We are so proud to have Jan represent Illinois, the IHSA and high school speech and drama across the country in this distinguished club. It is very fitting that Jan is the torchbearer among Fine Arts inductees from Illinois in the NFHS National High School Hall of Fame.”

As always, Heiteen is blazing trails. Although she hasn't said what's up next for her now that she has retired from DGS, you can bet excellence, enthusiasm and a whole lot of energy will be involved. Congratulations, Jan Heiteen, Hall of Famer!
Posted by JulieK at 12:28 PM