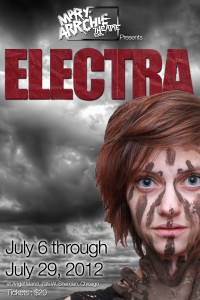 The big Illinois State University/Mary-Arrchie Theatre collaboration on "Electra" opened last night, with excellent reviews for the production itself and ISU actresses Emily Nichelson and Caitlin Boho as Electra and her vengeful mom, Clytemnestra.

Walsh goes on to call "the dynamic harmonizing chorus (Gwen de Veer, Lauren Pfeiffer, Paula Nowak)" brilliant, and single out Boho and Nicholson. "Caitlin Boho (Clytemnestra) [is] outstanding as the statuesque mother," Walsh offers. "Her oration is delivered with commanding majesty. And then as Emily Nichelson (Electra) rants at her, Boho’s emotionless face has two tears run down it. WOW! Nichelson is her own little powerhouse of emotion. She spirals out of control at exhausting speed. And then she sings with divalicious ferocity. ELECTRA is a musical. And the finale is a melodious gift to the gods."

Boho and Nichelson are both reprising roles they played when this "Electra" first appeared at ISU, and they've both been seen on-stage in other roles locally.

Boho was Mary II in Sarah Ruhl's sweeping "Passion Play" last year, and she played Miss Jones in the Frank Loesser musical "How to Succeed in Business Without Really Trying," where she brought down the house nightly with the big "Brotherhood of Man" anthem near the end of the show.

Nichelson appeared as naive Cecile in "Les Liaisons Dangereuses" at the Center for the Performing Arts, and in "Picasso at the Lapin Agile" and "Blackbird" at Centennial West.

"Electra" continues at Mary-Arrchie in Chicago through July 29, with performances on Friday and Saturday evenings at 8 pm and Saturday and Sunday afternoons at 3 pm. Ticket prices range from $15 to $20, and you can order them here.
Posted by JulieK at 10:49 AM