Barbara Stanwyck No. 1: THE LADY EVE Tomorrow on TCM 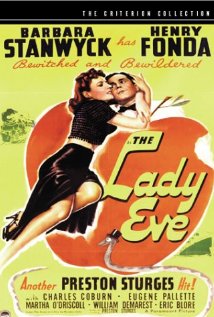 Turner Classic Movies is celebrating Barbara Stanwyck this month, and tomorrow night you have a chance to catch two of her best and most charming movies.

The first one, beginning at 10:30 pm Central time, is The Lady Eve, a 1941 romantic comedy from director/screenwriter Preston Sturges. Sturges was one of the Big 7*, the group of directors who made film comedy of the 30s and 40s so fabulous, and he was a step ahead since he did his own scripts. A definite wordsmith, Sturges specialized in movies with a) crazy characters, b) an amazing ensemble of character actors, and c) madcap situations that could get a little risque. So Trudy Cockenlocker, the girl in The Miracle of Morgan's Creek who got hit on the head during a USO dance and doesn't remember who she slept with to create the bun in her oven, is par for the Sturges' course.

Barbara Stanwyck's Jean Harrington is a con woman traveling over the Atlantic on a posh ocean liner with her cardsharp dad, played by the irascible and adorable Charles Coburn, one of those character actors I was telling you about. When sweet, dopey and rich Charles Poncefort Pike, played by Henry Fonda, gets on board their ship, every girl there tries to attract his attention. He is, after all, the heir to a beer fortune, even though he's more interested in snakes than Pike's Pale Ale. But Jean is smarter than most, and she knows exactly how to tempt Hopsie, as she begins to call him. Soon after she's got him hooked, she begins to fall for him, too, even though he has a cynical bodyguard, played by William Demarest, best known as grumpy Uncle Charley on the TV show My Three Sons, who has her number, and dear old dad, the cardsharp, is just dying to take Hopsie for all he's worth. Dad pulls his games, he and Jean are revealed as well-known shipboard swindlers, and all is lost between Jean and Hopsie.

Ah, but that's when the plot takes a detour. Because Jean is really angry that Hopsie dumped her, she takes on a new identity as Lady Eve Sidwich, a classier, more cultivated sort of woman. And then she cozies up to the Pike family at home, intending to pull the wool over the poor, deluded guy's eyes once again for revenge. Even though Uncle Charley, er, Muggsy, the right-hand man, insists she's "the same dame," Hopsie falls for it, hook, line and sinker.

Two more of my favorite character actors show up during this part of the plot, with the sly Eric Blore as a fellow con man who helps "Eve" get close to the Pikes, including gravel-voiced Eugene Pallette as the Pale Ale patriarch.

Everybody is wonderful, especially Stanwyck, who positively sparkles as naughty Jean/Eve, and Fonda, who comes off quite attractive even though his Hopsie is also completely befuddled. That's not an easy combo! The two show great chemistry as they navigate their way through all kinds of fizzy and sizzling little moments, and Stanwyck sells Sturges' crazy story with cheeky conviction.

The Lady Eve is outrageous, unbelievable, and yet so good-natured about all of it, you are perfectly willing to leap over that threshold of disbelief and root for Hopsie to fall prey to Jean's schemes so the two of them can be together.

There's just something about The Lady Eve.

*The other six were Frank Capra, George Cukor, Howard Hawks, Mitchell Leisen, Ernst Lubitsch and Leo McCarey, according to a film class I took long ago. If you go find It Happened One Night, The Philadelphia Story, Holiday, tomorrow night's Ball of Fire, Bringing Up Baby, Midnight, Easy Living, Trouble in Paradise, The Awful Truth and Sullivan's Travels, you will have a very nice overview of the best film comedies of the 30s and 40s, and they were each directed by one of those seven guys.
Posted by JulieK at 7:08 PM