LEVERAGE Finale: Going Out in Style 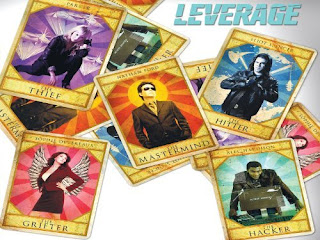 It's fitting that Leverage, the TNT series about elite con artists and thieves scamming the rich, powerful and immoral, went out on a big con, with a finale that was fun, scary and tricky from beginning to end.

"The Long Goodbye Job" opened with Nate Ford, the group mastermind, played by Timothy Hutton, looking beat up and laid low. We're told that three of his cohorts (i.e., thief extraordinaire Parker, played by Beth Riesgraf, computer guy Hardison, played by Aldis Hodge, and the enforcer, Eliot, played by Christian Kane) were killed in a botched job, while Nate was caught and is now being interrogated by a woman named Ellen Casey. Is she a hospital administrator, trying to ascertain his mental state? A cop? Or some sort of FBI, CIA or Interpol agent?

Going backwards, we see parts of the scheme to break into a place called High Point Tower, supposedly to get into the computer system there to secure information about a new drug that could cure the deadly childhood disease that took Nate's son. Along with that, we're shown Sophie, the actress in the group, played by Gina Bellman, putting on a terrible Lady Macbeth in a theater connected by underground tunnels to High Point Tower, while the others in the group encounter major problems with the heist, especially on the way out. In the end, after a fall down an elevator shaft, two different hails of bullets and a high speed chase, we're led to believe that Parker, Hardison and Eliot are all dead.

But, of course, appearances have always been deceptive on Leverage. Everything so far has been subterfuge, including the ultimate goal, which was nothing medical, but instead something called the Black Book that provides access to a huge list of evil bankers. And getting to the Black Book brings a Trojan Horse, in the form of perennial foe Sterling, played by Mark Sheppard.

"The Long Goodbye Job" was clever, deceptive, and maybe a little manipulative, what with showing us a heartbreaking scene with the fatally wounded trio expiring in the back of van... And the rewind, where we got to see what really went down, was a whole lot of fun, paying off all the twists and turns and giving us a lot of Sterling, who has always been a good foil for Hutton's Nate. That's about as perfect an ending as you could hope for with Leverage, sending Nate and Sophie (whatever her real name is -- we never did find out, although we thought it was Laura for a second or two) off into a sort of sunset, with Parker taking over the lead spot, backed up by Hardison and Eliot, on a new venture called Leverage: International, with a whole lot of worthy new marks offered by the Black Book.