Catching Up With Casting News: LEND ME A TENOR at Community Players 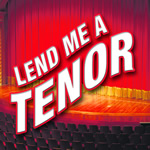 Community Players and director Cris Embree have completed casting for their January production of Ken Ludwig's opera-inspired farce Lend Me a Tenor.

Leading the cast will be Tom Smith as Max, the assistant at the Cleveland Opera Company who is desperately trying to keep star tenor Tito Merelli in shape to perform Verdi's Otello that night. International sensation Merelli, who will be played by Players' veteran Brian Artman, is being pursued by everyone from the bellhop to Max's girlfriend, adding romantic and over-the-top operatic complications to his already crazy life.

Hannah Kerns has been cast as Maggie, the perfect girlfriend except for that crush on Merelli, while Joe Strupek will take on Maggie's dad, Saunders, the opera company GM, who also happens to be Max's boss.

Also in the cast will be Opal Virtue, often the Players' costume designer, who will play Maria, Merelli's feisty wife who is convinced he's cheating on her; Wendi Fleming as Diana, a beautiful soprano with designs on Tito; Reena Artman as Julia, a weathy patron of the opera; and Thom Rakestraw as the wily bellhop.

Lend Me a Tenor is a fast-paced farce with all kinds of action, as everybody tries to get to Merelli, Merelli tries to take a nap, his wife pitches a fit, everybody misunderstands each other, and poor Max just keeps trying to keep it all afloat. Because we're talking Ken Ludwig, you can also expect the mirror game, where two people who are dressed exactly alike face off with comic results.

Community Players' production of Lend Me a Tenor begins with a preview on January 24, 2013, with performances continuing through February 3. For ticket information, click here. To read more about the play, its history and its characters, you can check out this piece.
Posted by JulieK at 10:52 AM