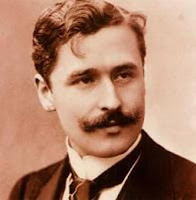 Not only did Georges Feydeau (born December 8, 1862) turn the boulevard farce into an art form, he was a historical hottie. See photo at left. (Although his wild ways mean you should probably not sleep with him if you should find yourself traveling to Belle Epoque France in a time machine or through a Woody Allen movie.)

You may know M. Feydeau from Hotel Paradiso, AKA A Little Hotel on the Side (L'Hôtel du libre échange) or A Flea in Her Ear (La Puce à l'oreille), both often produced at colleges and universities, or one of the other sixty some plays he wrote between 1882 and 1916. His plays have been translated into countless languages and made into more movies than you can throw a Coq at.

On the books, Feydeau was the son of Ernest Feydeau, a Parisian writer and scholar, but rumor had it he was the love child of Napoleon III or some other aristocrat. Royal or not, he had money problems and romantic complications most of his adult life. He married Marianne Carolus-Duran, the daughter of a famous painter, when he was 27, which kept him afloat financially for awhile, but certainly didn't make him happy on the home front.

They separated and eventually divorced, but that didn't stop him from writing some very unpleasant female characters late in his career that some feel were patterned after his wife. His plays were hugely successful, quickly garnering him a reputation outside France as well as in, but his gambling habits and predilection for wiling away his time at Maxim's, the seductive and beyond fashionable late-night Paris restaurant, kept him continually on the brink of financial disaster.

And if farce has never been considered as important as other, weightier forms of drama, Feydeau's farces rose above. Given the way his middle-class characters are tossed around by the whims of fate, battered by a crazy world they can't control, Feydeau is considered a forerunner of Theatre of the Absurd and surrealism.

Georges Feydeau died at the age of 58, probably from complications from syphilis.
Posted by JulieK at 1:04 PM