Delicious Historical Fiction in Susan Carroll's THE LADY OF SECRETS 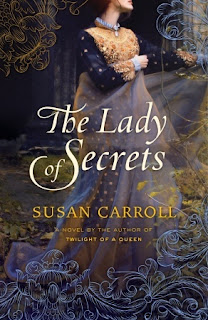 Susan Carroll specializes in historical fiction that mixes intrigue, magic and sweeping romance. Carroll's newest book, The Lady of Secrets, is the sixth volume in her Dark Queen series. Like the others, it involves a smart, somewhat haunted heroine, a "daughter of the earth" who practices healing arts on a French island.

The newest Lady of Faire Isle is Meg Wolfe, whose mother was a very dark and dangerous witch. With her mother's death behind her, Meg attempts to make her own path, a much more peaceful one than her mother envisioned, but events conspire against her, beginning with the arrival of two mysterious Englishmen. With talk of spells and witchery connected to a Silver Rose -- a name Meg's mother once attached to her -- Meg is pulled to England, where King James has made a habit of putting a torch to women who take any steps toward magic.

Carroll jumps into the 17th century and across the English Channel with this book, which gives her an opportunity to move beyond Catherine de Medici, the Dark Queen who gave her name to the series. As always, Carroll's characters are terrific, and Meg is a truly worthy heroine, trying to live down the shadows of the past and find a place where she fits in the world. She has two potential suitors, and we're left in the dark as to who's who or which she'll choose for a good long while, but I have to say, I found the Right Man much more appealing than the Wrong Man from the get-go. There is danger and real suspense as the story unspools, with a backdrop of Guy (also known as Guido) Fawkes and the Gunpowder Plot as well as James' superstitions and penchant for witchhunting.

One last note -- the cover, as you can see above, is simply gorgeous. Carroll has had some great ones from Ballantine, but The Lady of Secrets may just be her most beautiful yet. And everything that the cover promises, the book delivers. In this case, you can judge a book by its cover.

The Lady of Secrets is available at bookstores right now, including Amazon and Barnes and Noble. If you'd like to catch up with some of Susan's older titles, she is now offering Kindle and iBook editions. You'll find details on those books here.
Posted by JulieK at 7:49 PM

Email ThisBlogThis!Share to TwitterShare to FacebookShare to Pinterest
Labels: Susan Carroll, The Lady of Secrets