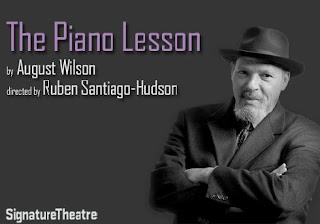 August Wilson's The Piano Lesson has been playing to great reviews at New York's Signature Theatre, with a cast that includes Brandon J. Dirden and Jason Dirden as Boy Willie and Lymon. Both Dirdens earned MFAs in acting from the University of Illinois, and Brandon Dirden is married to Crystal A. Dickinson, another U of I theatre alum who recently starred on Broadway in Clybourne Park. You can read a quick interview with the three of them here.

And The Piano Lesson with its double Dirden power has been such a success for Signature that they are extending the run to January 13.

This production is directed by Ruben Santiago-Hudson, an actor and playwright who was in the original cast of Jelly's Last Jam and the Broadway production of Wilson's Seven Guitars, for which he won a Tony Award. He also played Captain Montgomery on TV's Castle for three seasons.

Critic Charles Isherwood wrote in The New York Times that this revival "brings a timely reminder of how consoling, how restorative, how emotionally sustaining great theater can be." Isherwood continued, "As portrayed with heat-generating intensity by Mr. Dirden, Boy Willie seems filled to bursting with ambition, excitement, heedless hope." and he called Jason Dirden "wonderfully funny and touching" as Lymon.

Broadway.com has some very nice production photos of this Piano Lesson, showing off both Dirdens and the rest of the cast, while the Signature Theatre site offers Joan Marcus's official photos and video teasers, as well.
Posted by JulieK at 12:33 PM