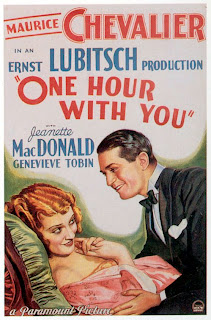 Turner Classic Movies is really hitting it out of the park, programming-wise, at least for my particular taste in film. We just got both The Lady Eve and Ball of Fire on Barbara Stanwyck Wednesday, and now we get Ernst Lubitsch Friday!

Lubitsch was one of the seven directors I listed in the piece on The Lady Eve earlier this week. I called them The Big 7 -- they really weren't called that in the 30s and 40s, although, at least from the vantage point of the 70s, they were considered masters of their comedic film craft in the 30s and 40s -- and Lubitsch may just have been the best of the bunch.

As you may guess from his name, Ernst Lubitsch was German. He was born in Berlin and began his career in Germany, working as an actor with Max Reinhardt at the Deutsches Theater just about a hundred years ago. But he turned to film rather quickly, first as an actor and then as a director, moving to Hollywood in 1922 when he was hand-picked by Mary Pickford to direct one of her movies. 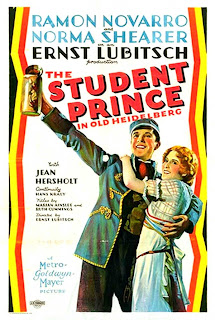 Lubitsch moved to directing musicals when talkies hit, including 1932's One Hour with You, a tuneful trifle with Maurice Chevalier and Jeanette MacDonald as a charming Parisian couple, blissfully married until a flirt named Mitzi tries to come between them. Ooh la la! One Hour with You is a remake of Lubitsch's earlier film The Marriage Circle, and, yes, this one did make it to my film class. Actually, I believe both The Marriage Circle and One Hour with You were there. Words like sophisticated and saucy come to mind for One Hour with You and its fancy French tomfoolery. And if you're like me, you will be very surprised at how mischievous, appealing, and lighter-than-air Jeanette MacDonald comes off.

One Hour with You will air tonight on TCM at 10:15 pm (Central time), just before Old Heidelberg. 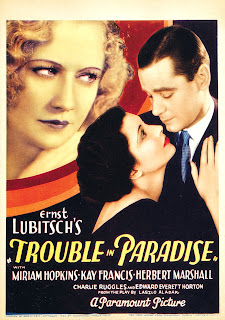 Also released in 1932 was Trouble in Paradise, the third Lubitsch film TCM has chosen for tonight. If possible, it's even more sophisticated and charming than the others. In this one, Lily pretends to be a Countress, but she's really a pickpocket, slipping expensive watches off her marks. She's met her match in Gaston, who says he's a Baron, but he's really an international jewel thief, expertly removing diamonds and rubies from the women he romances.

As played by Miriam Hopkins (she's the blonde staring daggers in the corner of the poster) and Herbert Marshall, Lily and Gaston are smooth, sardonic and slinky, in a Continental sort of way, making love and stealing from each other at the same time. But when Gaston tries to move in on wealthy Mariette, played by Kay Francis (the brunette looking clingy over there) to get at her jewels and money, Lily does not appreciate it.

Trouble in Paradise is unabashedly sinful, what with Lily and Gaston and their perfectly lovely life of crime, plus suggestive dialogue and a lot of winks and nods to its characters' sex lives, so it's pretty amazing the censors didn't squelch all the joy out of it. Ah well. It is left to us to enjoy this delicious pastry of a film, with Hopkins and Marshall giving silky, seductive performances as the naughty duo of thieves.

If you've ever heard of the "Lubitsch touch," this film is full of them. Look for sly touches of elegance that glide right past what might seem snarky or raunchy elsewhere. Lubitsch keeps his innuendo stylish and sophisticated, delicate and delightful. As a result, Trouble in Paradise is pretty much perfect. Or parfait. You'll find it at 7 pm Central tonight on TCM. 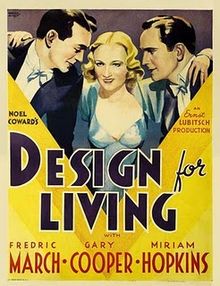 And, yes, there is one more. Noël Coward's Design for Living and its ménage à trois was so scandalous it couldn't open in London in 1932, when Coward wrote it. So it came to Broadway instead. What? Americans less puritannical than Brits? Apparently. Not only was it a hit on Broadway, with Coward himself and Lunt and Fontanne forming the triangle, but it quickly got picked up by Hollywood for a film version, with what must've seemed like the perfect director -- Lubitsch, of course -- attached.

But the 1933 film Design for Living isn't much like the play.  For one thing, pretty girl Gilda, played by Miriam Hopkins, and the two men she's in love with, Tom and George, played by Fredric March and Gary Cooper, are decidedly American. Gone is the European sophistication. Gone is any sense of Tom and George being attracted to each other as well as Gilda. Gone is the daring ménage Coward wrote.

Oh well. If you can forget about the original play, Design for Living still has three great leads romping around, a snazzy Ben Hecht script, and the inevitable Lubitsch touches.

Email ThisBlogThis!Share to TwitterShare to FacebookShare to Pinterest
Labels: Design for Living, Ernst Lubitsch, Miriam Hopkins, One Hour with You, TCM, Trouble in Paradise