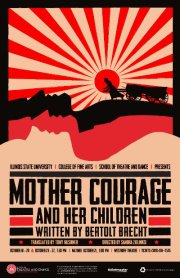 Illinois State University's School of Theatre and Dance has announced that their "fierce and ferocious" October production of Bertolt Brecht's Mother Courage, directed by Professor Sandra Zielinski, has been invited to perform at the regional level of the Kennedy Center American College Theatre Festival. That means ISU will be taking their entire production of Mother Courage up to Saginaw, Michigan, in early January to showcase their show and their program. And you can help!

ISU's Mother Courage was really terrific, with exceptional performances from Abby Vombrack as Mother Courage and Michele Stine as her mute daughter Kattrin, among others in the talented cast. Zielinski's use of music and on-stage musicians helped keep it properly epic, while the actors made it affecting and powerful. If you'd like to refresh your recollection of the production, you can see a cast photo, a couple of sketches of the scenic design, and a cast list here.

The Kennedy Center American College Theatre Festival was created in 1969 to connect theatre students from universities all over the country, allowing them to network, perform, and hear opinions from voices outside their own departments, with the overall goal of improving the quality of college theatre across the United States.

Every fall, colleges and universities enter their productions for consideration, with the finest among them chosen to attend regional festivals held annually in January and February. In addition to handing out awards to excellent productions and scholarships to worthy students, the regionl fFestivals offer programs, workshops and symposia on acting, directing, design, playwriting, criticism, dramaturgy and stage management. Regional festival productions like Mother Courage are judged by a panel of three judges selected by the Kennedy Center and the KCACTF national committee. These judges select four to six of the "best and most diverse regional festival productions" to travel to the national festival at the Kennedy Center in Washington DC.

ISU's Mother Courage will be performed at the Region III festival in Saginaw along with Dancing at Lughnasa by Brian Friel, as performed by cast and crew from the University of Wisconsin -- Parkside, Ghost Bike, a new play from Laura Jacqmin, produced by Wisconsin's Carthage College, a production of Oscar Wilde's The Importance of Being Earnest from the University of Wisconsin -- Whitewater, In the Soundless Awe, from Chicago's Concordia College, co-written by Concordia professors Andrew Pederson and Jayme McGhan, and another new play, Three Generations of Imbeciles, by Bill Baer, presented by Cuyahoga Community College.

To help ISU and Mother Courage get to Saginaw, you can find contribution information here, or proceed directly to the ISU Foundation online giving page.
Posted by JulieK at 7:28 PM