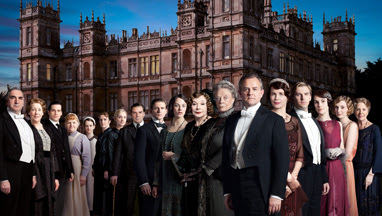 Are you ready for the return of Downton Abbey on January 6th? Lots of good stuff afoot in Season 3, with Bates in jail, convicted of murdering his horrible first wife; Anna hanging tough, determined to get him out; Lady Mary and Matthew making it official; Edith still looking for love; the Earl in financial trouble; and Cora's American mother landing on their doorstep to further complicate matters (and clash with the formidable Dowager Countess).

Shirley MacLaine will be on hand to play Martha, Cora's mum, going up against Dame Maggie Smith as Violet, the Dowager Countess who is at the ready with a withering glance or a cutting remark.

You can see a video preview of Season 3 from Masterpiece here or watch a scene (showing the clash referred to above) from the first episode here. Or, if you're more in the mood to relive the past, you can watch Season 2 episodes online.

The Colbert Report offered a really unusual way to ramp up to Season 3 with a mashup between Downton (and its cast) and Breaking Bad. "Breaking Abbey" is definitely worth your time. Soon Downton will be kicking it with mad bitches and benjamins... (That last should be a hint that there are bad words in the video. Forewarned and all that.)

Also in preparation for the new season (and for the special Christmas episode in Britain, the one we won't see till May) a baker has made a gingerbread version of the Abbey itself. It's pretty odd. And cool. But also odd. Watch Downtown Abbey, the Gingerbread Version, here. You can compare the gingerbread one to the real one pictured in "Breaking Abbey."
Posted by JulieK at 4:39 PM