Absolutely Fabulous TO BE OR NOT TO BE 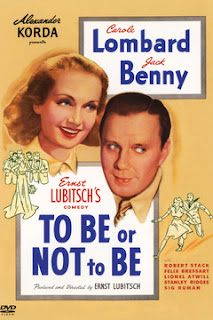 So we've already talked about Ernst Lubitsch's lovely Ninotchka, with Greta Garbo going from cold to hot, as the 7 pm (Central time) show in TCM's evening of Lubitsch. But after that, at 9 pm, it's To Be or Not to Be.

Ah, To Be or Not to Be... I love this movie. It's a wonderful comedy from 1942, based on Lubitsch's own story, but it also represents a bit of risky film business. The risks included the setting -- Poland during World War II -- the concept -- a troupe of Shakespearean actors in Poland during World War II, including comedian Jack Benny as the troupe's leading man -- and a bunch of oddball supporting characters, including a Nazi colonel whose nickname is "Concentration Camp" Ehrhardt. Dark humor, to be sure. Lubitsch decided to fight the Nazis the way he knew best. With humor.

If the premise was risky, the film's timing was terrible. It premiered in February, 1942, two months after Pearl Harbor and the United States' entry into the war, one short month after star Carole Lombard perished in a plane crash while returning from a trip to sell war bonds. And those terrible events made To Be or Not to Be seem "callous and macabre" to critics like Bosley Crowther in the New York Times.

Years later, with a bit more distance, To Be or Not to Be doesn't seem rude or mean at all. Instead, its dark comedy is terrific, as is Jack Benny as a very unlikely Shakespearean actor. It's hard to imagine Benny playing Shakespeare at all, and especially not Hamlet, but it turns out to be hilarious. (I wonder if he ever tried Malvolio.) At any rate, Benny's Joseph Tura gets slammed as an actor who is doing to Shakespeare what the Nazis were doing to Poland.

Carole Lombard is luminous as his wife, Maria, and every bit as funny as Benny, if in a totally different way. The running gag is that she cheats on him every time he has a soliloquy. That means her lover, who is sitting in the audience, gets up and walks out every time Joseph Tura hits "To be nor not to be."

The movie is full of that kind of sly, knowing humor, ably brought to life by some of the best character actors ever. Sig Ruman, who was one of the three comrades playing hooky in Ninotchka, is "Concentration Camp" Ehrhardt, hunky Robert Stack is the aviator Mrs. Tura is sneaking around with, and Tom Dugan plays Bronski, who can do a dead-on impersonation of Hitler that comes in handy. But the best of the bunch is Felix Bressart, a Jewish actor who shows up in a lot of Lubitsch films, like The Shop Around the Corner and Ninotchka. Whether it was the bushy mustache, the kind eyes (often seen behind spectacles) or just his genial manner, Bressart projected a lot of warmth in his roles. Greenberg, the part he plays in To Be or Not to Be, is one of his best. Like Bressart, Greenberg is a Jew. An actor with Tura's troupe, he has one major desire in life -- to get to perform Shylock's "Hath not a Jew eyes?" speech from The Merchant of Venice. Bressart bites into Greenberg with gusto, making you love him and Greenberg and root for both of them to get to play their parts.

I love To Be or Not to Be. It's smart and funny and the perfect movie for people who think comedy is the best revenge.
Posted by JulieK at 5:08 PM

Email ThisBlogThis!Share to TwitterShare to FacebookShare to Pinterest
Labels: Carole Lombard, Ernst Lubitsch, Jack Benny, To Be or Not to Be