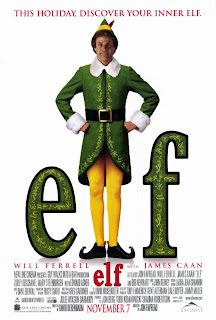 Last year, I did a whole series on the holiday movies I like, with notations on when and where those movies would show up on your television. Unfortunately, this year most of my favorites won't be aired. I don't understand it, either.  How can you not show Holiday and Christmas in Connecticut and Swing Time?

Luckily I own copies of those three (plus a whole lot more Fred Astaire movies just right for New Year's Eve) so I won't be marooned without good movies. Plus they're all available on instant view from Amazon.

And my second tier of holiday movies, the ones that are a little better known, are still around. Here are the ones I picked out last year, the ones that hold up for me.

Up first: Elf, the 2003 film with ex-SNL comedian Will Ferrell as Buddy, a full-size guy who's had a hard time getting by as an adopted child in the teeny-tiny elf world at the North Pole. An outcast for his inability to be a proper elf, Buddy shows up in New York, where he learns about real people, romance and families, with a marvelous supporting cast in both worlds. I can take or leave James Caan, although he's fine as Buddy's real dad, but it's lovely to see Bob Newhart as his elf papa and even lovelier to see Ed Asner (I still have kind of a crush on him from his Lou Grant days) as Santa. Elf is sweet and silly, never cloying, with Ferrell deftly playing Buddy as a wide-eyed naif who means well, even if he and his big feet step in all the wrong places.

You'll find Elf on the ABC Family network on December 26th and 27th. 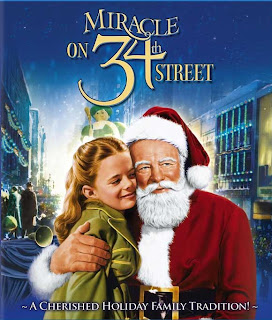 Miracle on 34th Street (the 1947 version) is one of the most recognizable holiday movies around, so everybody should know its story about a cynical little girl named Susan (played by the unbelievably cute Natalie Wood) and her hard-working single mother (Maureen O'Hara), neither of whom believes in Santa Claus. But then what appears to be the real Kris Kringle (played by the even more adorable Edmund Gwenn) arrives at Mom's department store and a firestorm of controversy erupts. Is he crazy? Is he the real deal?

You can find Miracle on 34th Street all over AMC from December 20th to 24th. 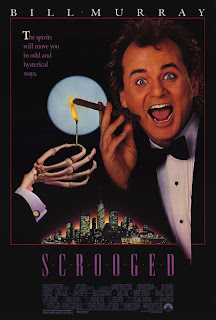 In Scrooged, Murray's character, Frank Cross, is too busy ordering people around for a live Christmas Carol broadcast to notice that he has no friends, his girlfriend (Karen Allen) left long ago, and he seriously needs a wake-up call on how to behave like a human being. The best part of the movie is its crazy take on his ghosts, with Buster Poindexter (credited here under his real name, David Johansen) as a ferocious cab driver Ghost of Christmas Past and Carol Kane looking pretty but packing quite a punch as the Ghost of Christmas Present. She wallops Cross in the face with a toaster in a moment that resonates long past the movie.

Scrooged is cynical and irreverent, with that snarky edge Bill Murray does so well. It's like a crazy ride in Buster Poindexter's Hellcab. But it's also hella funny and a welcome companion to all the other Christmas Carols out there.

I'm afraid you'll have to rent Scrooged at the video store (if you still have one) or get it on Netflix or Amazon, because it isn't showing up in anybody's TV listings right now. Bah humbug!
Posted by JulieK at 1:10 PM