DGA and WGA Nominees Match Up. Sort of.

The Directors Guild of America has announced its five nominees for direction of feature films, a list that almost always matches up with Oscar's directorial nominations, as well. The big five from the Directors Guild are:

Woody Allen, for "Midnight in Paris"
David Fincher, for "The Girl With the Dragon Tattoo"
Michel Hazanavicius for "The Artist"
Alexander Payne, for "The Descendants"
Martin Scorsese, for "Hugo"

There is some surprise out there in the Oscar-prognosticating world that Steven Spielberg was overlooked for 'The War Horse," as well as Tate Taylor for "The Help" and maybe Terrence Malick for "Tree of Life." I won't argue on behalf of any of those, necessarily, but I do think David Fincher and "The Girl With the Dragon Tattoo" is a puzzler.

I also find it interesting that three of the nominated directors were working on loving (and lovely) tributes to the past, with Woody Allen giving a nostalgic glow to Paris in the 20s in "Midnight in Paris," Michel Hazanavicius looking at the silent film era in "The Artist," and Martin Scorsese taking a trip back to Paris and the history of films in "Hugo."

And since "The Girl With the Dragon Tattoo" is set in Sweden, that means only one of the nominated directors was working with "American" material, and that one is set in Hawaii. 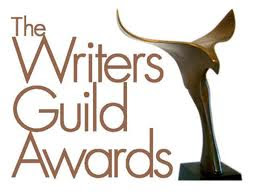 As for the Writers Guild, they've chosen to honor some of the same films, but not all.

In the Original Screenplay category, the nominees are:

And for Adapted Screenplays, the nominees are:

The writing nominations skew heavily toward comedy, or at least dramedy, with only "The Girl With the Dragon Tattoo" as an out-and-out drama. (If you find any humor in that serial killer grim-fest, let me know.)

That means "The Descendants," "The Girl With the Dragon Tattoo," "Hugo" and "Midnight in Paris" may be honored for both writing and direction from these guilds, which would be a definite boost for their Academy Award chances. Still, none of those seems like a sure-fire Best Picture that the Academy would go for.

Meanwhile, "The Artist," not eligible for Best Screenplay nominations from the Writers Guild because its author (director Hazanavicius) is not a member of that Guild, is the current top pick for the Best Picture Oscar as predicted by Gold Derby, a site that specializes in that kind of speculation.
Posted by JulieK at 1:14 PM