Over the weekend, Illinois State University hosted the annual Illinois High School Theatre Festival, while ISU drama students were over in Champaign-Urbana, where the University of Illinois was hosting the Region III portion of the Kennedy Center American Theater Festival at the Krannert Center for the Performing Arts. 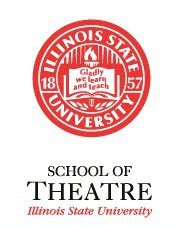 Congratulations to ISU's Owais Ahmed and Abby Vombrack for winning the regional ACTF Irene Ryan awards and earning themselves a trip to Washington DC for the next stage of the competition.

In other news, Community Players has announced auditions on January 16 and 17 for its upcoming production of "You Know I Can't Hear You When the Water's Running," a collection of four one-act plays by Robert Anderson. The plays to be produced are "The Shock of Recognition," involving whether you need a nude scene to make a play work, "The Footsteps of Doves," about a husband and wife thinking of switching to twin beds, "I'll Be Home for Christmas," another play about a long-married couple, this one waiting for the kids to come home for the holidays, and "I'm Herbert," about an elderly couple who can't seem to remember who they've been with in the past. No mention of what time of day the auditions take place, but there is more information about directors and the roles they're casting here. (Note: Joel Shoemaker, who is directing "I'll Be Home for Christmas," has kindly filled us in on the time for these auditions. Joel says they'll be at 7 pm next Monday and Tuesday. Thanks, Joel!)

And the Station Theatre in Urbana has released this nifty little slide show to clue you in on what you need to know about their current production of "Gruesome Playground Injuries."

And if you're trying to fill in the spots on your Oscar prediction card, you may want to catch "The Descendants" at Wehrenberg Bloomington Galaxy 14 Cinema, "Martha Marcy May Marlene" at the Normal Theatre, "My Year with Marilyn" at Starplex Normal Stadium 14, and "The Girl With the Dragon Tattoo" or "War Horse" at Carmike Palace Cinema 10, Starplex Normal Stadium 14 or Wehrenberg Bloomington Galaxy 14 Cinema. If you want to catch "Hugo," you'll have to drive to Peoria or Champaign, however. And for "The Artist," the French silent film that's sure to snag some Oscar nominations, the closet screening I've found is at the AMC Yorktown 17 at the mall in Lombard, Illinois, some 125 miles from Bloomington.
Posted by JulieK at 1:59 PM