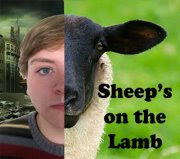 Yes, that's right -- one week from tonight may be the only opportunity you will have in your lifetime to see a musical about sheep. Well, sheep and lambs. And whatever the Theatre of Ted has concocted to go along with sheep and lambs. A little mint jelly?

"Sheep's on the Lamb," a musical comedy, comes to Capen Auditorium in Edwards Hall on the ISU campus next Friday and Saturday, February 3 and 4, with performances at 7:30 pm.

The Theatre of Ted describes their new musical as "an original musical comedy featuring terrible puns, silly songs, and some very talented people. It both makes fun of musicals and is proudly a part of the genre. With characters like Wool Smith and Baaaaaab Marley, Sheep's on the Lamb is goofy to say the least. The first act resembles a romantic comedy while the second is a post-apocalyptic sheep-dominated war story. It has everything you want and more. Oh and sheep, it has a lot of sheep."

So... Pretty Mutton meets Goattaca? (They didn't really say there would be goats. It's just that "Goattaca" sounds better than "Leg of Lamb's Run" or "Soylent Sheep.")

In any event, tickets for this musical about sheep are only $2 at the door, so you can hardly go wrong. Proceeds will be directed to the Theatre of Ted's Scholarship program.

The cast for "Sheep's on the Lamb" will include Alex Kostner and Robert "Cug" Leahy as Wool Smith Sr. and Jr., Kelsey Bunner as Mary, who I'm guessing has a little lamb or two, and Becky Solomon as Bo Peep. Max Zuckert, Jake Pollock and Ethan Goldman penned the script; Goldman also directs, with Andy Hudson as Musical Director.

You are warned that, this being Theatre of Ted, there may be baaaad words and woolly situations.

Click here for further info and instructions.
Posted by JulieK at 12:02 PM