If 2010 year was one long Sondheim Fest, what do we call 2011 and 2012? A lot of the celebrations in 2o1o were directly related to Stephen Sondheim's 80th birthday, which happened in March, 2010, but it seems as if nobody wanted the party to end. So in 2011, we got a second volume of Sondheim lyrics and musings about those lyrics, a revival of "Follies" that moved from the Kennedy Center in DC to Broadway and spawned a terrific cast recording, another "Follies" right here in Chicago, an all-star concert version of "Company" at the New York Philharmonic, and then a filmed version of that "Company," starring Neil Patrick Harris that toured movie theaters from coast to coast.

And now, as 2012 gets going, the Broadway "Follies" is preparing to move to LA, with the wonderful Victoria Clark now playing Sally instead of Bernadette Peters. That "Follies," with Jan Maxwell, Danny Burstein and Ron Raines still in the cast, is scheduled to play LA's Ahmanson Theatre from May 3 to June 9. Clark is a Tony winner herself, and she has played Sally before, when it was an Encores! show in 2007, opposite Donna Murphy as Phyllis. If you're in LA, if you can get to LA... Don't miss this "Follies," which played to SRO crowds in New York.

Plus the open-air "Into the Woods" built into a tree in Regent's Park Open Air Theatre in England in 2010 is coming to New York this summer. Will the show look like it's playing in a giant tree house in Central Park? I hope so! 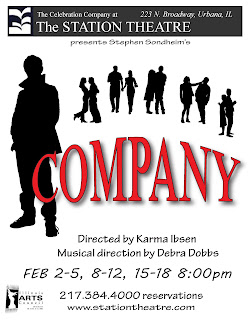 We're also getting a production of "Company" closer to home, as the Station Theater opens its production this week. Directed by Karma Ibsen Riley, with Debra Dobbs as Musical Director (and playing Joanne), the Celebration Company's "Company" features Dallas Street as Bobby, the guy surrounded by married friends who has just never found his way to a committed relationship. Should he have married Amy, Jenny, Sarah or Susan, all married to other men by now? Should he have tried harder with April, Marta or Kathy? Is it better to be a) alone, b) partying with a passel of friends, or c) cozy at home with one partner? What will Bobby figure out?

The Station's "Company" runs February 2-18, with all performances at 8 o'clock. For more information, click here.

And "Merrily We Roll Along," the backwards show about a composer named Frank and his two friends, Mary and Charlie, who start out with all the promise in the world and then somehow lose the strands of the friendship along the road to fame, is gearing up for Encores! at New York's City Centre, directed by James Lapine. The Encores! MO is to revive overlooked or underappreciated pieces of American musical theater, putting on terrific "staged readings" (that are really a lot more than readings) using first-rate casts with only a couple of weeks of rehearsal.

For this "Merrily," stars Colin Donnell (Frank), Celia Keenan-Bolger (Mary) and Lin-Manuel Miranda (Charlie) are already hard at work in rehearsal, and Broadway.com and Playbill.com went behind the scenes to share rehearsal video of their "Old Friends." Click here or here to see it yourself. Fabulous! (The Broadway.com one even has a little intro by Miranda.)

Playbill also has a photo gallery to give you a sneak peek at how Donnell, Keenan-Bolger and Miranda, as well as Betsy Wolfe as Frank's wife Beth, will look in some of the eras that fly by in the show, and Theater Mania has an interview with Colin Donnell about what it's like to play charismatic-but-seriously-flawed Franklin Shepard.

NYCC is also offering an inside-rehearsals blog from ensemble member Mylinda Hull, with all kinds of cool info.

"Merrily We Roll Along" plays 14 performances at New York City Centre between February 8 and 19. For lots more information, you can visit the NYCC site here. "Merrily" asks the musical question "Who wants to live in New York"? and with this kind of show happening there, the answer is a resounding, "Me!"
Posted by JulieK at 10:20 AM