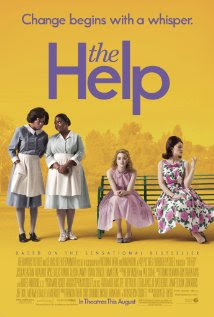 I've already talked in this blog about "Hugo" and "Midnight in Paris," two of the nine films nominated for the Best Picture Oscar. They're both wonderful.

I've seen most of the others on the list, too, but wasn't moved to write about them at the time. Now that the Academy of Motion Picture Arts and Sciences has deemed them worthy of nominations for Best Picture, however, I thought I would give a couple of them a whirl.

"The Help" is based on the best-selling book of the same name, written by Kathryn Stockett. The story goes that Stockett wanted her childhood best pal, Tate Taylor, to write and direct the film version of her novel, and he held the option on the book even before it was published. Both Stockett and Taylor have said that they really did have "co-mothers," much like the black servants in the novel, who are the ones who really raise the children, wipe the runny noses, cook the meals, clean the houses and keep everything running smoothly on the homefront.

"The Help" is set in Mississippi in the 1960s, when even middle-class women had domestic help, and shows both the awful treatment the black women faced on a day-to-day basis as well as the friendships which evolved between these African-American caretakers and their white charges. As a device to get into the story, we start with a young woman named Skeeter, played in the movie by current It Girl Emma Stone, who isn't interested in the whole husband-house-and-baby thing that consumes every other socially acceptable white girl in town. Instead, Skeeter wants to be a writer. She gets a try-out writing a column on homemaking hints for a local newspaper, but it's not really anything she knows anything about, so she turns to her friend's extremely capable housekeeper, Aibileen, given fierce life by Viola Davis, for help. And then Skeeter is appalled when she hears about a campaign to require the black ladies, the help, to use separate bathrooms rather than spread their alleged germs to their white employers. So Skeeter comes up with the idea of writing an exposé that will accomplish several things -- it will reveal the hypocrisy and craziness of people like Hilly Holbrook, the head of the Junior League, who launched the "Home Health Sanitation Initiative," i.e., the separate bathroom campaign; put a spotlight on how poorly treated the ladies who make up "the help" are; and also get Skeeter a book contract and open the door on her literary career.

Aside from the Best Picture nod, Viola Davis is nominated as Best Actress for her warm and honest performance as Aibileen, with Octavia Spencer, who plays mouthy maid Minny, and Jessica Chastain, in the role of Celia, a trashy outsider who has married one of the town's golden boys, both in the Supporting Actress category.

All three turn in terrific performances with a lot of energy and personality. Davis's Aibileen is deservedly the heart of the movie, with Spencer (another old friend of Tate Taylor) adding humor and irreverence as the maid who always gets in trouble for her temper, but usually gets out of it because she is such a good cook. Chastain, another It Girl of the moment, is also funny and fresh as the loud, awkward Celia, who strikes up a friendship with Minny that helps them both survive. Yes, Minny and Celia are stereotypes, but Spencer and Chastain transcend those stereotypes just by sheer force of personality.

Bryce Dallas Howard and Sissy Spacek also add vivid performances to the mix as the awful, awful Hilly and her poor senile mother, with a cameo from Cicely Tyson late in the movie that broke my heart.

A lot of critics have raised issues with the film and the fact that the black characters are all maids, while the plot provides that they need a white girl, Skeeter, to come to their rescue. Both are film clichés that certainly deserve mention and discussion. And, yes, it is unacceptable that the only roles African-American actors could get for so long were maids and hookers. But Viola Davis and Octavia Spencer looked at the roles in "The Help" and saw something that they wanted to play, something beyond just stereotypical "Beulah, peel me a grape" kinds of roles. If the roles go to the heart of what it is to be a maid, if they are three-dimensional and compelling characters, does it really matter that they are maids?

The white savior thing is more troubling. Why does Hollywood (and I guess the publishing industry, as well, since it was that way in the book, too) feel the need to begin and end with the white character who will fix everything for the black people? Couldn't we get the servants' stories from them, instead of from a white translator? Still, Davis and Spencer are so ferocious and riveting that it's hard not to see this as their movie, not Emma Stone's, no matter who got top billing. And that helps a little.

"The Help" makes Mississippi in 1960 look luminous and bright, diffused with bright colors and dappled sunlight, courtesy of cinematographer Stephen Goldblatt and production designer Mark Ricker. It's a pretty, warm film all-around, with messages of conciliation and friendship to bind up the wounds suffered in the Jim Crow South. As the last images of the movie indicate, Aibileen still has a long row to hoe, a long way to walk, even if there has been a little comeuppance and a little justice earned over the course of this story. That last image of Viola Davis stayed with me for a good, long time.

Small side note: Viola Davis shares my birthday. Growing up, I was always looking for an interesting celebrity co-natalist. My sister had Robert Redford and my mom had Sophia Loren, and all I got was Jerry Falwell and Hulk Hogan. (Alex Haley also shared our birthday, but he had passed away by the time I was looking for co-natalists, and that didn't seem to count.) So, anyway, thank you, Viola Davis, for being awesome and talented as well as being born on the same day as me!
Posted by JulieK at 1:37 PM