My Night of January 16th

Given the date, I could not stop myself from commenting on a lesser-known piece of the Ayn Rand oeuvre, a stageplay called "Night of January 16th." It happens to be the first play I was ever involved with, back in junior high. It's about a trial, wherein the long-time mistress of a wealthy man is charged with his murder. He was a Bernie Madoff type, with pots of money, less than legit business dealings, and many enemies. Did his mistress push him out a window? Did he jump? Did the gangster (colorfully named "Guts" Regan) who is also in love with Karen knock him off? Those are the questions the audience is supposed to try to answer.

The gimmick of the play, the reason it made a name for itself, I would imagine, is that the jurors are drawn from the audience and they decide the fate of the defendant right then and there, on stage, at the end of the show. 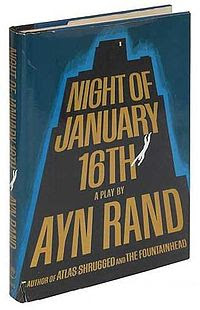 I desperately wanted to play the character (one of the parade of witnesses in the trial) who refers to herself as a "terpsichorean," which I took to mean "stripper." I was 14, skinny, gawky, odd, and not very attractive (most 14-year-olds are not, so I don't think I'm being too hard on myself by saying that) and absolutely nothing like a slinky or sleazy club dancer/mobster's moll from the 1930s. I still wanted that role with the white-hot passion only an awkward 14-year-old can muster to play a sleazy dame with a thick accent and no morals.

You may be asking yourself what kind of junior high puts on a play with some guy's mistress on trial for basically being a slut (everybody judges her for sleeping with her married boss for years and years and then hooking up with the gangster), along with a floozy of a nightclub dancer in support. I don't have an answer to that. I would probably not choose "Night of January 16th" for a cast of 12-to-15-year-olds.

I was not cast as the "terpsichorean," you will be happy to hear, but instead as the court stenographer. I had no lines. I spent the entire play sitting at a little desk, furiously tapping some sort of keys and inserting many highly animated facial expressions into the proceedings whenever any of the other actors revealed anything salacious as part of their testimony.

There are two bits of back story that make my experiences with "Night of January 16th" stand out in my memory. The first was that, perhaps because I was so disappointed not to get the role of the stripper, who actually had lines, the drama teacher/director who was in charge told me that I would be the designated understudy for all the other female roles. There are not a lot of female roles in "Night of January 16th." The defendant, Karen Andre, is female, and so is the deceased man's wife, who appears as a witness, plus an elderly Swedish housekeeper. Those are the only female roles listed in the current version of the play, according to Wikipedia, but we also had an extra housemaid, who was another witness, and, of course, my stenographer. Unfortunately, one of the actresses cast in this junior high "Night of January 16th" was somewhat unreliable. After she skipped a rehearsal or two, the teacher/director told her that if she missed any more, I, as the designated understudy, would be given her role. Neither she nor her friends took kindly to that threat, and one of her friends spotted me in the hall between classes and right then and there, punched me. This person (the puncher) told me that she would make me very sorry if I "stole" her friend's role in the play. This was more drama than I was really prepared for at the age of 14, and I asked the teacher/director for help. He told me I was on my own. Thank goodness the girl showed up for rehearsals after that, because, seriously, I would probably just have dropped out of school rather than face fistfights in the hallway.

The other piece of drama at this, the absolute beginning of my theatrical career, was that we were, as I recall, actually performing the play in January. If not, perhaps December of February. In any event, I lived outside of the town in which the junior high and its auditorium were located, and of course I didn't drive yet, being only 14 and in junior high, at least a year away from driver's ed. So my parents were on the hook to drive me in for evening rehearsals.

And then the weather got very dicey. The teacher/director had made it very clear to all of us that anybody who did not appear in the dress rehearsal would not be allowed to be in the show. I should tell you at this point that, no matter what my other failings were, like not being a very good actress, I was an A student. An A+ student. I turned in papers on time. I occasionally faked an illness to stay home and watch old movies on TV, if there was something I particularly liked in the TV Guide, but I was still as responsible, steady and reliable as any 14-year-old out there. So when a blizzard hit the day of our dress rehearsal, I was beside myself. How could I miss dress rehearsal? Our teacher had made it very clear that anybody who didn't show up for dress would be banned from the show! And this was my first show! And I had the huge, important role of the court stenographer! How would anyone in the audience know how to respond to the testimony of the various witnesses if I wasn't there to raise my eyebrows, gape, gasp, goggle, double-take, tremble and otherwise represent the first stages of a stroke?

Well, my father said, given the blizzard, that he saw no reason to drive me nine miles to get to what was just a rehearsal for a school play. I pleaded. I cajoled. I feel sure I must've wept. Whatever weapons I had at my disposal, I used them. Eventually, my dad said, "Okay, I will drive you." I made it to dress rehearsal.

And the next night, when the weather was much less dire, our production of Ayn Rand's "Night of January 16th" opened as planned. I do not remember if the students chosen for the jury found Karen Andre guilty or not guilty. I do not remember if the person playing my beloved terpsichorean found her inner stripper. (I think she didn't. I think she shoved her hair over her face and mumbled through the role because she was embarrassed. But I could be making that up.) And when all was said and done, and my parents had witnessed my debut as an actress, my dad was howling with laughter. "You had me drive through a blizzard so you could be in a play where you don't have any lines?" he asked. "That's hilarious!"

Oh well. I was assured that my court stenographer histrionics were very well received. By my parents, anyway.

And that is what I remember of my "Night of January 16th." I have a feeling that is not what Ayn Rand intended.
Posted by JulieK at 2:21 PM