If you're a film buff, you have undoubtedly seen character actor William Duell, who earned a BA from Illinois Wesleyan in 1949, on screen in such roles as epileptic inmate Sefelt in "One Flew Over the Cuckoo's Nest," or as Congressional Custodian Andrew McNair in "1776," recreating a role he'd also played on Broadway. 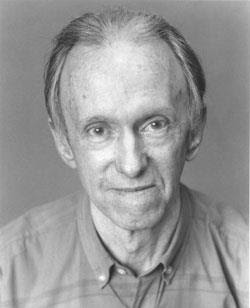 The New York Times reports that Duell died December 22 at his home in Manhattan, at the age of 88.

Duell is one of the people Illinois Wesleyan Theatre lists at the top of its "Proud Alums" lists; he certainly enjoyed a distinguished film and theater career, and he had one of those "I know that guy" faces you would recognize even if you didn't quite remember the name.

Duell was best known as a small, mischievous presence, described as "puckish" by the New York Times in their obituary, who created a vivid persona both because of his diminutive size and his large personality, with deft comic timing and quirky charm that kept him well-employed.

His first Broadway appearance was in Bertolt Brecht's "Threepenny Opera" in 1954, in a production directed by Carmen Capalbo that starred Lotte Lenya as Jenny and Bea Arthur as Lucy Brown, with John Astin and Paul Dooley in Macheath's gang during the show's initial run. That "Threepenny Opera" came back as a "return engagement" a few months later and then ran for six years, with Duell there from September, 1955, to September, 1961. He returned to "Threepenny Opera" in a 1976 revival, after appearing in other Broadway shows like "A Cook for Mr. General" (as the Cook in the title), "The Ballad of the Sad Cafe" and "1776."

Although he had roles in films like "The Pope of Greenwich Village," "The Hustler" with Paul Newman and Tim Robbins' star-packed "Cradle Will Rock," Duell continued to return to the stage, memorably appearing as Erronius in "A Funny Thing Happened on the way to the Forum" in 1996 and as Dr. Bradley in "The Man Who Came to Dinner" in 2000, both with Nathan Lane. That "Man Who Came to Dinner" also showed up on PBS in October, 2000, as a broadcast of a live performance. The latter is available on DVD and I'd recommend it if you want a look at William Duell, a great character actor, in fine form as a sort of hybrid film/stage actor.
Posted by JulieK at 1:26 PM