Mathew Green on the Sweet Side of "Gruesome Playground Injuries"

"Gruesome Playground Injuries" is an intriguing little play, dealing with two characters -- Kayleen and Doug -- who meet up at various times in their lives, often in hospital rooms, when somebody is suffering some sort of injury or malady. The timeline jumps around through their lives, showing us just how Kayleen and Doug came to share a connection, a relationship, based on attempting to heal the damage they've suffered. 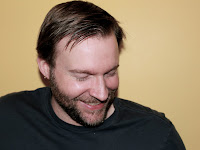 When I read the play, I thought it had the potential to really pack a punch, but it definitely asks a lot of its director and actors. So I posed some questions to director Mathew Green (pictured at left) and his cast of two, to ask about them and their backgrounds, as well as how they see this play. First up, here's what Mathew Green had to say...

How long have you been associated with the Celebration Company at the Station Theatre? What brought you to the Station?

This is my eighth season with the Station. I submitted a proposal to direct in the summer of ’05, and since then I’ve been directing and acting pretty regularly. "Gruesome Playground Injuries" will be my 19th production.

Have you worked with other local theaters or schools/colleges/etc.?

I work as an instructor for Inner Voices Social Issues Theatre at the University of Illinois, working with the ensemble and the dialogue-facilitation class. I just completed my first semester, and we’ve just started work on next semester’s show. As for other local theaters, I directed "Arsenic and Old Lace" for Rantoul Theatre Group back in ’07.

How did you get involved in theater? When did you know it was a path you wanted to take?

I grew up in Robinson, Illinois, and the junior college there—Lincoln Trail College—had a pretty vibrant community theater. A drama in the fall, a musical in the spring—that sort of thing. And while I was pretty shy as a kid, I had always been a writer. When I took my first acting class at LTC, I became fascinated with playwriting. It was the best form of storytelling I had ever encountered, and I was hooked. I wrote, acted, and directed there for a couple of years, but then finishing my degree and finding work sort of got in the way. I wasn’t a drama major, so my access to theater was relegated to a seat in the audience, but I kept reading and writing plays, studying on my own.

You mentioned you started as a writer. Do you prefer writing, directing, or acting?

I still love writing when I get the chance, and my job with Inner Voices feeds that need. And while I do enjoy acting quite a lot, I think directing is more my strength. Gary Ambler once told me that he sees himself as an actor who also directs; I feel like I’m the opposite: a director who also acts.

What do you enjoy most about the Celebration Company?

I love the idea that the Celebration Company is open to just about anyone, but it has a core group of people who have been producing great work together for years and years. Honestly, one of my proudest accomplishments is being accepted into that group. And the work ethic at the Station is serious. I’ve seen plays at that theater that rival the best professional work. This is not a hobby to them, or to me. This is a craft. 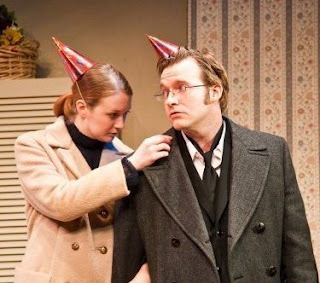 I’m always looking for something I haven’t done before. Sometimes that has to do with the type of play, and sometimes it has to do with the demands of the role. Sidney was a challenge because I’m uncomfortable with comedy in general, while Beane required a lot of intense concentration and emotional investment. As for standout roles… I have to put Beane up there, as well as Denny from "A Steady Rain," another really challenging, emotional role. I don’t know how much “range” I have, but I’m always interested in finding out. 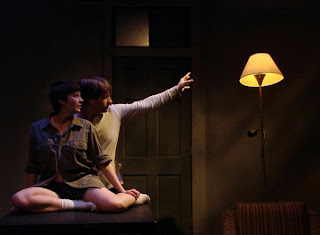 Katie Baldwin and Mathew Green in "Love Song"
Photo Credit: Jesse Folks
How many shows have you directed at the Station? As a director, what pulls you into a particular show?

Gruesome Playground Injuries will be my seventh directorial effort for the Station. I think my criteria for choosing shows to direct is very similar to my criteria for acting. I always look for a new challenge, and I always look for a story I want to tell. The challenges are always unique to the show at hand. Some shows require a lot of technical proficiency in the form of choreography or timing or actual technology, and the director turns into kind of a traffic cop or ringmaster. Other shows, like "Playground," are so much more intimate, almost fragile, and mostly they require a good listener.

If I’m being honest, I have to admit that, in the last few years, I’ve been most interested in plays that have women as lead characters. I have a two-year-old daughter, and from the time I found out she was on the way, I’ve leaned toward women’s stories. That’s what made "Rachel Corrie" special to me three years ago, when my wife was pregnant. The season after that, with a baby in the house, Eurydice’s relationship to her father haunted me. And now Kayleen in "Playground"…. Not that she’s the “main character.” It’s definitely a two-hander.

From a craft standpoint, I do think I get a little better which each show. Which is not to say that I was lousy to begin with or that I’m great now. Just that I’m still learning and improving. Regardless of whether it’s comedy or drama, I think I learn more about how to get what I need in order to tell the story honestly. That, in turn, makes me better at helping actors get where they need to go.

Rajiv Joseph’s “Gruesome Playground Injuries” is a quirky show, with its story of two childhood friends who keep finding each other at times of terrible physical trauma in their lives. One thing I found interesting in reading the play was its shifts in time and the fact that it isn’t linear in how it tells its story or racks up its injuries. Is that presenting any challenges?

As we rehearse the play, we are always aware of where we are on the play’s timeline. The non-linear structure keeps us on our toes, but it hasn’t tripped us up yet. I actually love the way the play jumps around, because, in life, we never remember things in order. Certain moments stand out, and those memories lead us to jump to other memories, from other times. I don’t think very many of us look back in a straight line.

I believe you said you’ve worked with both Katie Baldwin, who plays Kayleen, and Rob Zaleski, who plays Doug, several times before. How does that inform the process of putting together “Gruesome Playground Injuries”?

I’ve been lucky enough to work with a lot of great people at the Station, but I do keep coming back to certain actors. And with Katie and Rob, there is definitely a shorthand. "Playground" requires us to go to some dark places, so it’s important that we have a certain rapport, a certain amount of trust.

What story do you think the play is trying to tell us? What are Kayleen and Doug and all those injuries really about?

Well, Kayleen and Doug have some damage, for sure. Some of it is physical, like the scars that Doug accumulates from his misadventures; and then there’s the internal, emotional variety. Scars, bruises, and the like are symbolic of the injuries we can’t see.

Anything else you’d like to say about the play? Why should audiences come to see it?

Despite a somewhat ominous title, this can be a very sweet play. And it features some terrific acting. It’s about people who are soul mates, for better or worse. With Katie and Rob, I have a cast that makes their connection seem very real and powerful.

Thanks, Mathew! Very interesting and thoughtful commentary on the play. 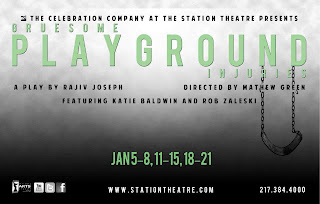 "Gruesome Playground Injuries" opens this week at Urbana's Station Theatre, with performances January 5-8, 11-15, and 18-21. All performances begin at 8 pm and tickets range from $10-15 depending on which night you choose. Call 217-384-4000 to make reservations or click here to use their on-line reservation service.

And here's a little more about Mathew Green:

Mathew Green is a director, actor, and board member at the Station Theatre in Urbana, Illinois. He is also a part-time instructor for the Inner Voices Social Issues Theatre group at the University of Illinois. When not in one theater or another, he is a full-time dad to Ozella, who is almost two years old, and a husband (anniversary number 8 this January). Mathew is currently directing "Gruesome Playground Injuries" for the Station, and he will appear in Gina Gionfriddo's "Becky Shaw" this spring.
Posted by JulieK at 1:37 PM