If you look at the poster for season 5 of AMC's "Mad Men," you will notice two things. 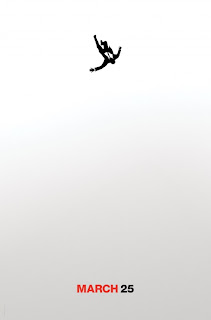 1) The figure that represents Don Draper, our protagonist, is in free fall.

Forgive me while I take a moment to make happy noises. (Sorry, Don, about that free fall thing. I'm paying attention to the second piece of information.) "Mad Men" is back! Finally!

It seems like it's been forever since we last saw dapper Don Draper (Jon Hamm), smarty-pants Peggy Olson (Elisabeth Moss), hard-drinking Roger Sterling (John Slattery), luscious Joan Harris (Christina Hendricks), ambitious Pete Campbell (Vincent Kartheiser), and the rest of the crew at Sterling Cooper Draper Pryce, the 60s ad agency hanging on by its fingernails (or by the manicured fingernails of dapper Don Draper) in a changing world.

If I recall correctly, when we left "Mad Men," Don (or his alter ego Dick. Or possibly both of them.) had just (shockingly) married his secretary, toothy Megan, and dumped smarter, all-around cooler Faye; Joan had discovered she was pregnant while her odious husband was off in Vietnam and she got a promotion that gave her more responsibility but no extra money; Roger was hanging out with Joan even though he was married to a chippy named Jane, his former secretary, plus he'd lost the all-important Lucky Strike account; Cooper (Robert Morse!) was ticked enough to walk out on the agency; Betty (January Jones) had finally moved her nasty, shallow self (and the Draper kids) out of the house she once shared with Don, firing beloved nanny/housekeeper/surrogate mother Carla (Deborah Lacey) on her nasty, shallow way out the door, making it abundantly clear to her new husband just how nasty and shallow she really was; Sally Draper (Kiernan Shipka) was 10-going-on-25; and Peggy had shown the moves and smarts to score a pantyhose account that the ailing agency desperately needed. I remember absolutely nothing about what Pete Campbell was doing. And I like him. Sort of. He's kind of a punk, but he has an adorable wife, Trudy (Alison Brie), and I will always remember the two of them dancing a delightful Charleston at a garden party. That's almost enough to save Pete as a character. Almost.

All of that was back in October of 2010, with the world inside the show up to October 1965. Since I have vivid memories of 1966 and 1967, I am hoping they don't jump too far into the future when the new episodes begin. I want "Star Trek" and "The Monkees" and "Mission: Impossible" and "How the Grinch Stole Christmas." Not to mention "Sweet Charity" on Broadway, "Who's Afraid of Virginia Woolf?" on the big screen, and "The Sounds of Silence" from Simon and Garfunkel in the background of the characters' lives.

In the past, "Mad Men" creator Matthew Weiner has hit some of the big cultural events while overlooking others, managing a good mix, so that "Mad Men" doesn't come off as a time travel vehicle, but instead, a story of specific people of the period and how they're affected by the times they live in. So if I'm hoping for some Monkees, I will also understand if they don't make it into Weiner's world.

I am also hoping that Bertram Cooper and Robert Morse come back, that Betty is out of the MM universe for good, that Carla comes back, that Peggy gets a decent boyfriend, that Roger dumps his secretary/wife and marries Joan, and that Don dumps his secretary/wife at the precise moment Rachel Menken's husband dies, so those two can be all reunited after all this time. Rachel Menken was totally his best match.

But mostly I am just happy to have Sterling Cooper Draper Pryce and "Mad Men" back. March 25. With a two-hour season premiere. Given that poster, I'm not expecting a whole lot of instant happiness. And that's just fine.
Posted by JulieK at 6:21 PM