There's been a lot of interest in what Shakespeare might have done in his downtime, even including a run-in with Queen Elizabeth I herself, in the film "Shakespeare in Love." 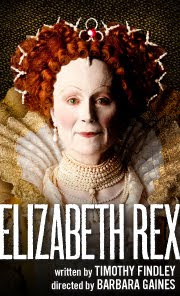 In "Elizabeth Rex," currently playing at the Chicago Shakespeare Theater, playwright Timothy Findley took a different path, however, sending the Virgin Queen, Gloriana, into a barn where Will Shakespeare and some of his cast are resting after a performance. It's an unlikely idea, that such a grand queen should dirty her hem in a barn, but Findley gives her a reason. She needs a distraction.

To keep Shakespeare and his actors (along with a bear, a pet of one of the actors) stuck, Findley supplies a curfew, which means that nobody is allowed to leave this barn adjacent to the great hall where they performed. Meanwhile, Queen Elizabeth's one-time favorite, the Earl of Essex, as well as Shakespeare's former patron, the Earl of Southampton, are imprisoned in the Tower, with Essex set to be executed in the morning on the Queen's order. So Elizabeth takes her trip to the barn, too, to pass the hours till morning, when her lover will meet the ax.

As Findley's "Elizabeth Rex" opens, we see a bit of the end of "Much Ado About Nothing" as the Queen, majestically played by Canadian actress Diane D'Aquila, also watches. When the Queen arrives in the lowly barn, she tells the assembled crew how much she liked the play, and she particularly wants to meet handsome Jack Edmund (Andrew Rothenberg), who played Benedick, and Ned Lowenscroft (Steven Sutcliffe), the actor who played Beatrice. Lowenscroft, we are told, is the premiere performer of his time when it comes to Shakespeare's female roles. But Ned is ill. He suffers from a deadly pox (presumably syphilis) and he seems to be failing a bit more every day.

As the hours wear on, the Queen engages in conversations with Will Shakespeare, here nicely played by Chicago Shakespeare favorite Kevin Gudahl, as well as several of his company, but the major battle of wits and exchange of ideas comes with Ned. Elizabeth has repressed many of her female traits in order to be a strong, fearsome regent, and she asks Ned, who so often portrays women, to fill her in on how a women should act.

There are issues of mortality, passion and love here, as well as the obvious feminine/masculine, strength/weakness questions arising from pitching a battle-hardened queen against a man who always plays women. The specter of Essex hangs heavily over Elizabeth, as Southampton's fate hangs over Shakespeare, and memories of a captain he once loved, probably the one who gave him the pox, hang over Ned Lowenscroft. And while all of that is going on, Shakespeare is working on "Antony and Cleopatra," drawing from the Queen in the room to fashion Cleo.

Barbara Gaines, Chicago Shakes' Artistic Director, takes the directorial reins on "Elizabeth Rex," giving it a sense of urgency and movement that helps the arc of the play a great deal. By the time we get to the morning, beautifully lit by Philip S. Rosenberg on Daniel Ostling's charmingly scruffy barn set, "Elizabeth Rex" has definitely cast its spell and hit its target.

Findley's play is smart, witty, and an actors' showcase, with Gloriana herself front and center. You can see how she's dressed for much of the play in the poster image reprinted above, and it's hard not to look at someone dressed like the sun, especially when D'Aquila gives her Queen so much charisma and strength. Wigged or bald, made-up or bare, in her golden gown or a much less grand Beatrice costume, D'Aquila commands the eye.

Sutcliffe's role as Ned is trickier. He has to be sick, saucy, inconsistent, lovestruck, angry, and heartbroken, all in the same room as Queen Elizabeth, the ultimate drama queen. Again, the role is an actor's dream, and Sutcliffe takes it on with energy and abandon.

Roderick Peeples, seen quite a few times at our own Illinois Shakespeare Festival, is funny and fulsome as reprobate Luddy, Bradley Armacost capers sweetly as senior trouper Percy Gower, and Eric Parks, someone I remember seeing on stage during his tenure at the University of Illinois, makes a good impression as Matthew Welles, the one who plays Claudio and the other juvenile leads in the company.

Jude Roche deserves special mention for 1) playing his entire role buried in a huge bear suit, and 2) managing to convey weariness, pain and affection from deep inside that bear. Amazing.

"Elizabeth Rex" continues at the Chicago Shakespeare Theater on Navy Pier until January 22. Findley wrote the play in 2000, and it has had a few productions since then, but this one is very special. Sterling acting, terrific production values, and one unbeatable bear... Ticket info here.

(As a side note, I would love to see "Elizabeth Rex" played in repertory with "Much Ado About Nothing," which begins this play, and "Antony and Cleopatra," which is supposedly being written during this play, with some of the same actors who are supposedly playing roles in "Much Ado" taking those roles in "Much Ado," and the actor we see as Benedick and reading a few of Antony's lines taking those roles, too. Maybe we should even throw in "The Winter's Tale," so the bear has something else to do?)