In Case You Missed the Golden Globes...

I admit I don't pay much attention to the Golden Globes as awards. It's hard to take them seriously when there are only 93 members of the Hollywood Foreign Press Association deciding them. Oh well. 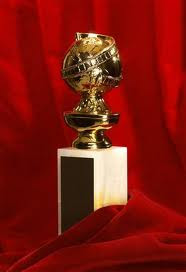 They're fun because they happen before the Oscars, because they combine TV and movie people, because the gowns tend to be cool, and because everybody there seems about half-lit, meaning there are always gaffes, stumbles, bleeping-outs and general hilarity. (I doubt anybody expected Meryl Streep to be the one getting bleeped, but there you are. Hilarity.)

This year, I thought the fashion was pretty nice in general, host Ricky Gervais was pretty funny, if much less snarky than last year, and who got what was the least interesting part of the evening. But in case you are keeping track, here are the major award winners from last night's ceremony:

Best Motion Picture (Comedy or Musical):
THE ARTIST. (Even though most of us have not seen this movie yet, the HFPA loves European movies. This movie is different, artsy and very, very French. It was a lock.)

Best Performance by an Actress (Drama):
Meryl Streep in IRON LADY. (Another lock.)

Best Performance by an Actress (Comedy or Musical):
Michelle Williams in MY WEEK WITH MARILYN (Nobody knows why this was classified as a comedy. Perhaps so Michelle Williams didn't have to compete with Meryl Streep?)

Best Performance by an Actor (Drama):
George Clooney in THE DESCENDANTS. (See: HFPA loves Clooney, above.)

Best Performance by an Actor (Comedy or Musical):
Jean Dujardin in THE ARTIST. (See: HFPA loves "The Artist," above.)

Best Performance by an Actress in a Supporting Role in a Motion Picture:
Octavia Spencer in THE HELP. (Spencer had a showy role in 'The Help," a movie that was well regarded by critics for the most part, and she was very good in that showy role. She has been cleaning up awards in supporting categories, and this one is no surprise.)

Best Performance by an Actor in a Supporting Role in a Motion Picture:
Christopher Plummer in BEGINNERS. (Another fine performance in a showy role in a movie not likely to win anything else. Plummer shoots and scores!)

Best Screenplay of a Motion Picture:
Woody Allen for MIDNIGHT IN PARIS. (See how they're spreading their awards around so everybody gets something? When you only have 93 voters, you can do that. Really, really liked this movie and not gonna quibble about it winning for its screenplay.)

Best Television Series (Drama):
HOMELAND on Showtime. (Not even one major network choice in the nominations. "Homeland" is an excellent choice.)

Best Television Series (Comedy or Musical):
MODERN FAMILY on ABC. (Look, a network got something! "Modern Family" is a smart, funny show, and again, I'm not going to quibble. I would've chosen "Parks and Recreation," myself -- it didn't even get nominated -- but thank goodness they avoided the twee nightmare that is "New Girl" and the muddled mess that is "Glee.")

Best Performance by an Actress in a Television Series (Drama):
Claire Danes in HOMELAND on Showtime. (Danes is working her derriere off in "Homeland" as a woman with serious mental issues and a mission to out a terrorist everybody else thinks is a hero. Definitely deserved. And another win for a cable show.)

Best Performance by an Actress in a Television Series (Comedy or Musical):
Laura Dern in ENLIGHTENED on HBO. (I have not seen "Enlightened." Note that it, too, is a cable program. But again, kudos for avoiding the Manic Pixie Dream Girl who is the "New Girl.")

Best Performance by an Actor in a Television Series (Drama):
Kelsey Grammer in BOSS on Starz. (I'm sure Kelsey is fab as a Mayor Daley type big city boss. Cable wins again. James Vincent Meredith, a former Champaign-Urbana actor who is now a member of the company at Steppenwolf, is a supporting player in "Boss," so the more notice it gets, the better.)

Best Performance by an Actor in a Television Series (Comedy or Musical):
Matt LeBlanc in EPISODES on Showtime. (Go, Cable!)

Others: My beloved "Downton Abbey" won Best Mini-Series or Motion Picture Made for Television, Kate Winslet won Best Actress in a Mini-Series, etc., for "Mildred Pierce" on HBO, and Idris Elba took the Best Actor in a Mini-Series award for "Luther," which came from the BBC.

Best Supporting Actors and Actresses must compete in a catch-all of "Best Performance in a Supporting Role in a Series, Mini-Series or Motion Picture Made for Television." Jessica Lange, in "American Horror Story," and Peter Dinklage, in "Game of Thrones," were named the winners.

And "The Adventures of Tintin" won Best Animated Feature. I would've picked "Puss in Boots." But I am not now and never have been a member of the Hollywood Foreign Press Association, so I don't get a say. 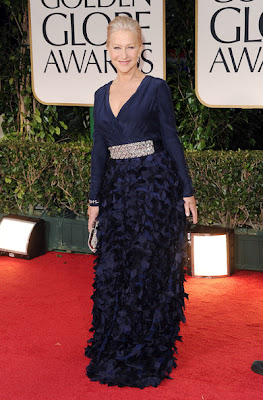 You can see all the nominees and winners here, and check out the fashions at Entertainment Weekly, TV Guide or at the home of Tom and Lorenzo, who blog about fashion all the time, not just during Awards Season. My pick for Best Dressed of the evening? Helen Mirren, seen above.
Posted by JulieK at 12:00 PM