Barbara Stanwyck No. 2: BALL OF FIRE Tonight on TCM 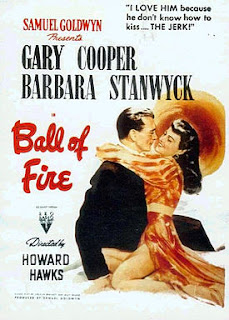 Yesterday we talked about Barbara Stanwyck month on TCM through the lens of The Lady Eve, her 1941 romantic comedy with director and screenwriter Preston Sturges. The movie TCM will be screening right after The Lady Eve is another gem, and Stanwyck is just as spirited and sparkly.

It's Ball of Fire, a screwball take on Snow White and the Seven Dwarfs directed by Howard Hawks, one of Hollywood's most versatile directors, with a fizzy, funny screenplay by Charles Brackett and the legendary Billy Wilder.

In this one, Stanwyck is Sugarpuss O'Shea, which has to one of the best names ever in film history, a nightclub entertainer romantically linked to a gangster. Gary Cooper is her screen partner, but he's not the gangster He's Bertram Potts, a professor of linguistics currently working on an encyclopedia with a group of elderly academic types, each with his own specialty. They're cooped up together in a house, slaving away, desperately trying to finish their project at long last.

But Bertram takes a stroll over to the nightclub where Sugarpuss is entertaining, hears her delicious slang, and invites her to help him out by giving him the inside scoop on her jazzy lingo. She declines, until she needs a place to hide out. It seems the coppers are on her tail to drop a dime on her main squeeze, Joe Lilac, who is on ice after maybe bumping off a rival.

Once ensconced at the house where all the professors live, Sugarpuss takes over, sharing all her best slang with Pottsie (she's given Bertram that nickname) and her slinkiest conga moves with his colleagues. Things are great until Joe Lilac resurfaces, huge engagement ring in hand. But by that time, Sugarpuss is starting to have feelings for shy, awkward professor Pottsie.

Things go south from there. Or maybe west, since they all end up in New Jersey. Gangsters! Adorable old men in a conga line! Barbara Stanwyck in gold lamé with a bare midriff! Gary Cooper in a bowtie! Gene Krupa drumming "Drum Boogie" with matchsticks! It just doesn't get any better than that.

C'mon. Who can resist a movie with people named Sugarpuss, Asthma and Pastrami?

Don't resist. Give in to Ball of Fire. It's at 12:15 am (Central time) tonight on TCM, right after The Lady Eve. You'll be drum-boogieing all night long.
Posted by JulieK at 6:11 PM